Introduction: PARKIcap: Designing an Ambulatory cueing device for Parkinson’s Patients. Parkinson's disease is a neurodegenerative disorder and has motor and non-motor symptoms. Motor symptoms include, freezing of gait, slowness and falling episodes, tremors, rigidity, postural instability. Typically, people who present with PD have an inability to maintain internal gait rhythm, resulting in an abnormal gait pattern including short shuffling steps, decreased arm-swing, freezing, festination, decreased stride length and reduced walking speed. Rubenstein and colleagues advocate the use of cueing devices in physiotherapy, as such devices have demonstrated an immediate effect on gait, with improvements in walking speed, and stride length. Auditory cues using buzzers with adjustable frequency/ speed of beats are used to patients' individual needs. Visual cues are provided using a laser beam light that directs the foot to step forward. Both of these can be used together or individually as per patient’s requirement. Cueing training is aimed to improve step length and walking speed, prevent freezing episodes and improve balance for ambulation of Parkinson’s patients. So, in this study we have designed an auditory and visual cueing device.

Methodology: Study Design: Experimental study, (pilot study). Study Setup: Physiotherapy department, in a Tertiary health care hospital. Study Population: Ambulatory Parkinson’s patients, Hoen and Yahr scale 1,2. Materials used: Line Laser, Buzzer, Lithium Ion rechargeable battery, 8051 microcontroller, and a cap. Department Review Board permission is sought. The device is simulated together. Timed up and go test with and without the device is assessed and data analysed. The block diagram of the device (Figure 1), shows power supplied by the lithium ion rechargeable battery to both line laser and the buzzer. 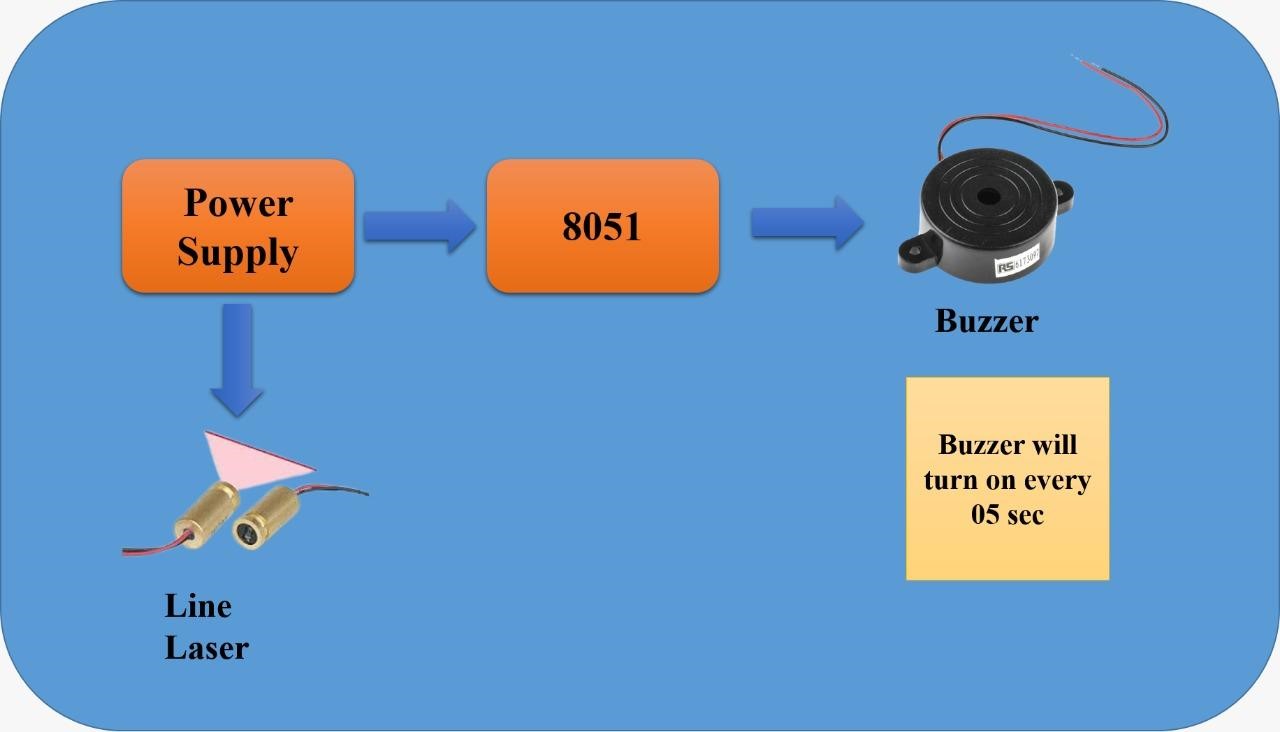 Figure 1: Block Diagram of the Device

This is the Parkicap, as the patient turns on the device, it provides visual and auditory cues and the patient can look at the line laser beam on the ground which initiates stepping and also the buzzer beep provides auditory cues.

Results: The ParkiCap was tested on two Parkinson’s patients, using timed up and go test. Step length improvement of 3 cm & 2 cm was seen and time taken to cover the test reduced by 3 secs & 1 sec in the two patient’s respectively. The gait pattern improvement was noticeable as festination were seen to be reduced. Patients also commented that they felt better safety and ease to walk with the ParkiCap. In our study we found that with the use of the ParkiCap, timed up and go results of the two patients with and without the ParkiCap shows that their step length increased and also the time period taken to complete the test reduced, which may be because of the auditory and visual cueing they received. Patients explain about the device as, “Easy to use and provides good guidance for walking” which correlates with previous literature that advocates the use of cueing devices in physiotherapy.

Conclusion: Cueing training may be a useful therapeutic adjunct to the overall management of gait disturbance in Parkinson's disease. With this use of wearable technology, it allows patients to receive cues without an additional ambulatory aid. It also helps to adapt to the cue type, content and dose which may improve the efficiency of training with FOG. Thus, ambulation in the community will be made safe and easier.

This work is licensed under a Creative Commons Attribution-NonCommercial 4.0 International License.